Hello friends and family! As we head into our last week we are feeling very bittersweet. We are all very excited to go home and get to sleep in our own beds, and simultaneously sad that the semester is winding down and we have to end our adventures together.

Last week we spent 7 days meditating and doing yoga at the Phool Chatti Ashram, outside of Rishikesh. The location was beautiful, with a view of the Ganges River right down below. While some of us had more experience than others, and some of us were less excited to do two classes of yoga each day for a week, it turned out to be a valuable experience for all of us.

Here is an example of our daily schedule:

Some of the types of yoga that we did were called pranayama, the breathing exercises, and assana, the poses. One day people got into pairs and groups and practiced laughter yoga, which are therapeutic laughing exercises that are meant to open up your lungs and release more endorphins in your brain.

One part of the day that we all really enjoyed were the meditation walks. Each day after breakfast and Karma Yoga (chores) we would go on a walk to a different place along the river. Two of the days, we went to spots along the Ganges River to meditate. One of the days we did a small hike up to a really pretty waterfall, and another we had a tour of the Phool Chatti garden, where they grow much of their own food. The best day for most of us, though, was when we went for a dip in the Ganga. As we walked in, the group sang a chant that we had been learning that week, “Om, Ganga Mai,” and each released a flower in the river symbolizing something we wanted to “let go of.” Afterwards, we fully submerged ourselves in the icy cold water three times. Many of us found it to be a moving and meaningful moment.

At the end of the week, we had a bonfire and everyone got into groups and sang songs based on their country. We heard songs in Spanish, Dutch, Finnish, Korean, and more! We and the three other Americans at the ashram went with “I Want It That Way” by the Backstreet Boys and, a classic, Jingle Bells. It was a really fun night.

On the last day, we had a ritual fire ceremony where we dressed in all white or clean clothes and sat together to repeat another chant that we learned, 108 times. This number is an important one in both Hinduism and Buddhism, and is the number of beads on the Mala necklace. We were also given a small bowl of wood shavings and dust, made up of 7 different types of wood, each with their own sacred meaning. Each time we finished a round of the chant we threw a pinch of the wood into the fire. It was a nice way to end a week of learning more about the culture of yoga in India and of self reflection. 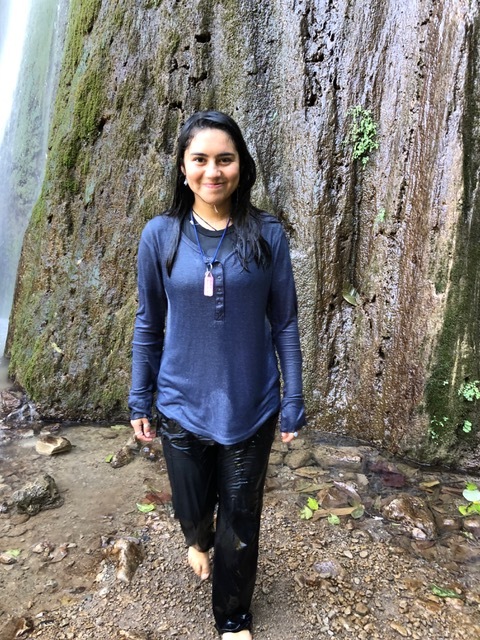 Going into the waterfall on a meditation hike. 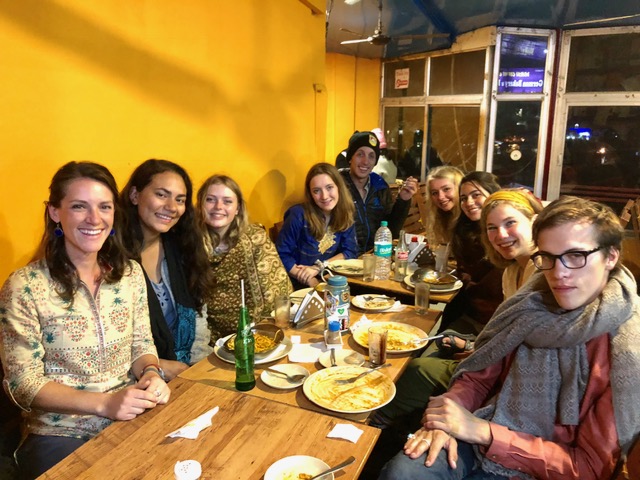 Celebrating Friendsgiving before the Ashram! 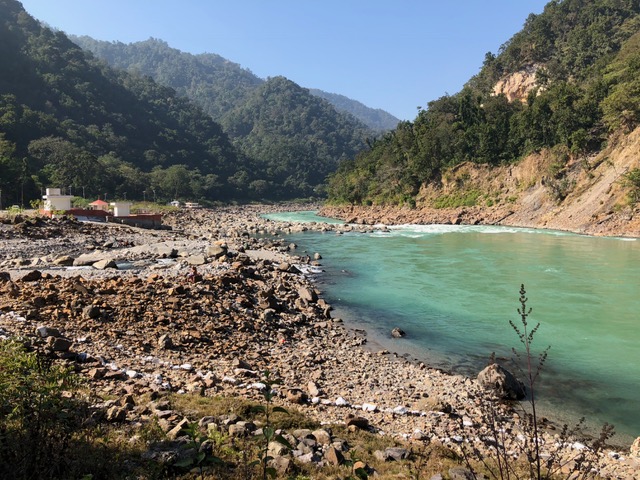 View near the Ashram. 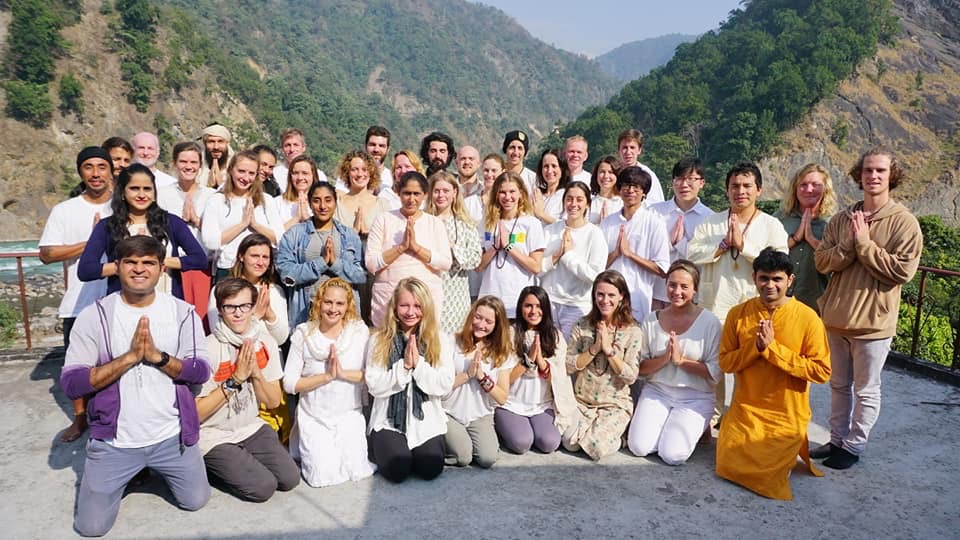 Last day after the fire ceremony. 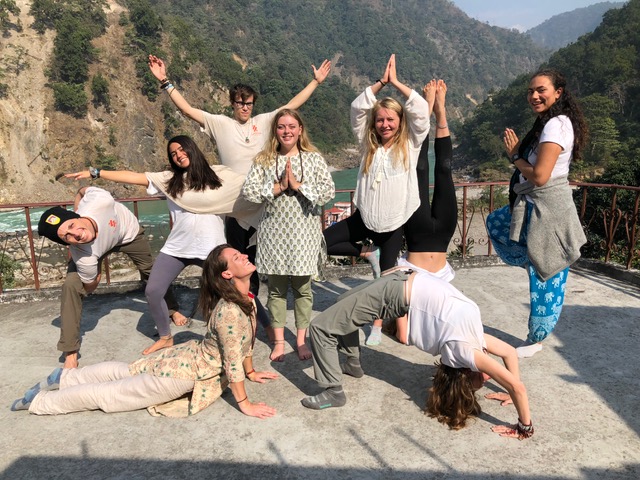 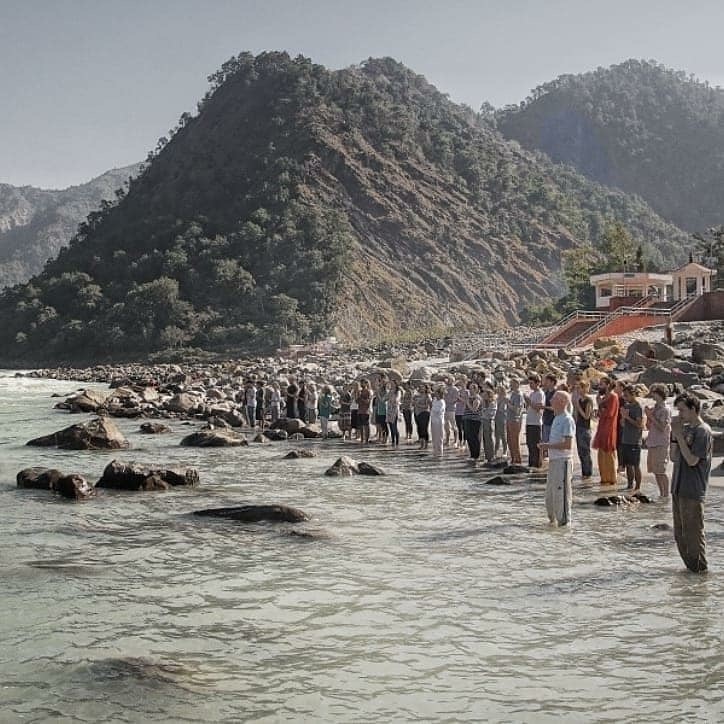 A dip in the Ganga. 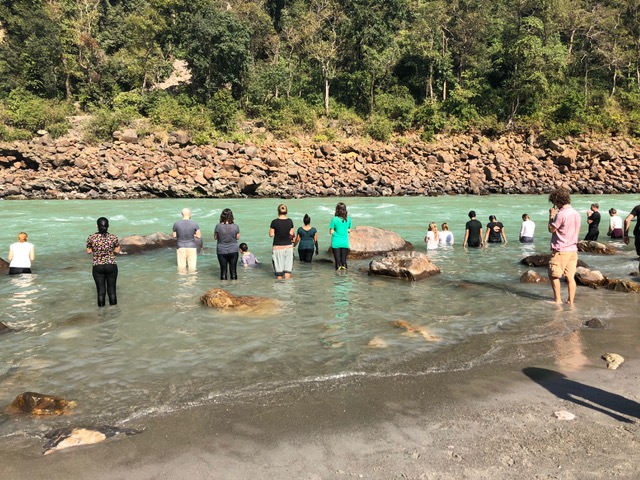 We just opened a second Italy & Greece group for t